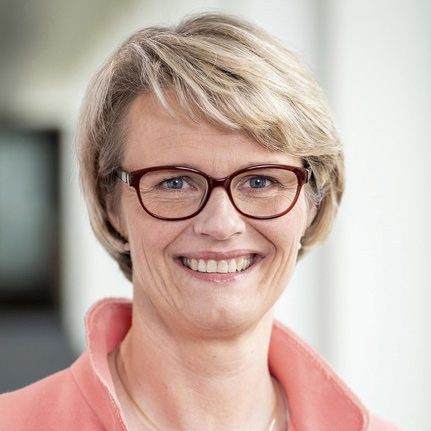 Anja Karliczek was appointed Federal Minister of Education and Research and member of the government of Federal Chancellor Angela Merkel on 14 March 2018.

Following her training as a bank clerk at Deutsche Bank AG and a period of employment at the bank, Anja Karliczek underwent training in hotel management at her family’s hotel during which she also gained qualifications to train apprentices. She worked in a managerial position at the Hotel Teutoburger Wald from summer 1994 until becoming a Member of the German Federal Parliament (Bundestag) in 2013. She has three children.

She completed her studies in business management at the FernUniversität Hagen in 2008 with a diploma thesis analysing the fiscal advantages of transferring pension obligations from the employer’s point of view.

She was the Parliamentary Group’s rapporteur on the Finance Committee for the topics of old age provision, employee shareholding, the Life Insurance Reform Act and Solvency II with the Investment Directive. In the field of tourism, Anja Karliczek was responsible for initial and continuing training in the hotel and catering sector, quality initiatives in the German tourist industry and the EU funding period 2014-2020.

She began her political career in 2004 when she was elected as Member of Tecklenburg Town Council. Here she held the position of Chair of the Committee for Families, Senior Citizens and Social Affairs and Chair of the Lengerich Adult Education Centre Association.

Anja Karliczek was born in Ibbenbüren on 29 April 1971.

Welcome notes to the conference